Skip to content
No Comments on Understanding The “Thank You Economy”Finance adminJuly 15, 2018

The business world has gone beyond a state of evolution in recent years. In many years, it’s a state of genesis. Better yet, it’s a rebirth like the phoenix from the ashes. The way most businesses must operate to thrive in today’s ultra-competitive world is based upon a re-imagination of the very ideas that helped small businesses grow a century ago.

We are living in the ‘Thank You Economy’ thanks to social media and other forms of instant communication. Businesses who want to flourish must recognize this.

Thanks to Gary Vaynerchuk’s new book, business owners do not need to be experts in social media to know the right way to use it. They simply have to understand five major principals and let those principals guide them in their online (and offline) engagements.

Before the Internet, before television, in the days where mass communication was something that happened in Town Halls and churches, western society lived in the original Thank You Economy. Mom and Pop stores dominated most cities, keeping their stores stocked with the items that their customers wanted and very few other things.

What made them successful was the basis for their existence – they knew their customers. It was more than just knowing what items sold better or which profit margins were the strongest. They literally knew their customers. When “Bob” or “Leslie” walked in, the employees of the store knew their names, what they normally ordered, who their kids were, and why they missed church last Sunday.

Mass production, improved transportation, instant communication channels, and increased competition slowly degraded this type of business over the past decades, culminating in recent years with a completely impersonal business style that lacks humanity. For the most part, the Internet put the nail in the coffin.

A portion of the Internet is pulling the nails out. Social media has given a voice to the people. It has allowed a way to communicate publicly with companies large and small. Thanks to social media, the Thank You Economy is not simply popping in for a quick appearance. Today, it has become a necessary ingredient for success.

There’s a reason that Vaynerchuk’s wine business outsells Costco and Wine.com. By taking on the historical “Mom and Pop” mentality, he has repeated history, only on a grander scale. If the Internet contributed to taking the humanity out of sales and services, social media is re-injecting it right back in. 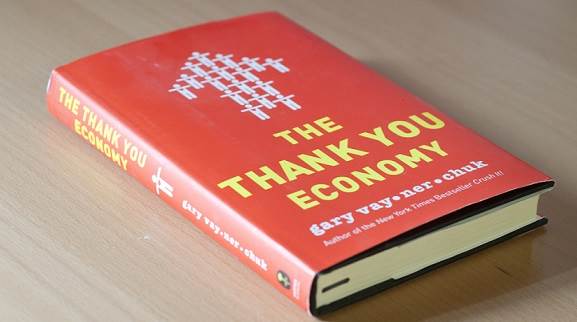 There are two parts to this aspect of the Thank You Economy. First, our goal in business is to establish loyalty from our customers. It has been said many times that keeping a customer is easier than getting a new one, but it should also be noted that getting more business from a loyal customer is the best strategy of them all.

Social media can easily be used as a customer retention tool. In fact, it has proven to be effective even when price and convenience get in the way. Look at Comcast. They have helped set the trend of using social media to listen and respond to customer challenges. Their services are rarely the cheapest in a given market and they have been known in the past to be far from the most convenient choice, but by keeping the channels open publicly through Twitter and Facebook, they’ve been able to retain customers while continuing to grow.

Loyalty is earned. It’s based upon hearing what the customers are saying, and reacting accordingly. Social media is the right venue to make this happen because it can serve the dual role of keeping customers happy while gaining new customers as a result.

In theory, this is all great stuff. In practice, it’s a challenge without the other aspect of loyalty. To truly attain a level of strong loyalty from your customers, you must prove to be loyal to them and their needs as well. Loyalty is a two-way street.

In the past, there were few channels where upset customers could be heard. The concept of “word of mouth” has always been considered important even before the phrase was coined. Today, word of mouth can be exponential. It can be viral. An airline who broke a guitar a decade ago would not be hurt by it. They wouldn’t be forced to do anything other than repeat their policies and eventually ignore the victim.

As United learned, it’s a different time. For better or for worse, the ability of individual issues to be amplified world-wide has forced businesses to take customers seriously. Loyalty is the key. Having a sincere desire to help every customer in need, to step up regardless of policies and regulations, and to demonstrate the willingness to go above and beyond the sale are things that can only be accomplished if your company has a mindset of being loyal to the customers for the sake of the customers (and as a result, for the sake of the company as well).

For years, most business faked it. “How can I help you? Have a nice day!”

Nobody wants to believe that their businesses were being unauthentic, but they were. We trained our employees to say certain things. We scolded employees who weren’t smiling enough in front of customers. We focused on being professional and tossed out terms like “customer-focused.”

In the back room, we would joke about that lady that comes in on Wednesday’s with the rude kids. That kind of talk was rarely discouraged. We only worried about the times when customers were watching.

Authenticity can no longer be faked. A lack of sincerity can be seen in real life interactions and displayed for the world to see. Again, it’s in the mindset of a company that disasters can be avoided. Policy is not enough to make employees online and in real life represent the company in the right light. It starts at the top.

The number-crunchers that built successful companies in the 80s and 90s would have a hard time duplicating that success today if they weren’t authentic in the way they felt about their customers. Leaders lead by example. Truly caring about what happens in your business and more importantly to you customers is the difference between business yesterday and business in the world of the Thank You Economy.

When you say “Thank You,” you have to mean it. Being real is one of the most important keys to success.

It’s a three-word statement, but they are three words that you can live (and succeed) by in the Thank You Economy. There is a scene in Pretty Woman where Julia Roberts’ character walks into a store dressed to the nines and carrying bags with thousands of dollars worth of clothes. She talks to an associate who had previously dismissed her because of her old outfit.

Roberts’ character asked if the associate remembered her and whether or not the associate was paid on commission. When she received a double-affirmative, she held up the bags and said, “Big mistake. Huge!”

Every customer may be your next Pretty Woman. You can tell what a customer is currently spending with your company by checking spreadsheets and invoices, but you don’t know how much their spending with a competitor. You don’t know if they’re spending a little now with you and other businesses in hopes of finding the best place to spend all of the money. You don’t know if the glowing review they write on Facebook will be read by a big fish looking to spend millions on what you have to offer.

Customers do not put their Klout score on their foreheads. They don’t tell everyone that their blog has 20,000 daily visitors. They don’t have a link to their 50k subscriber YouTube channel on their T-Shirt.

Even if they did, it shouldn’t make a difference.

Every customer must be treated like they’re your best customer in the Thank You Economy. As old-school thinking begins to prevail again, some of your competitors may be already doing it. If you want your business to progress at the right pace, you can no longer think of certain people as VIPs.

They all are (or could be sometime soon).

Be Willing to Reorganize

Your people must see things in the right way. You’re there. You see the light. You’ve read the book and understand the way the Thank You Economy works. Now, it’s time for the tough decisions.

Not everyone is going to see it. As hard as it may be, you may find a need to reorganize. The need may be there to take someone who is customer facing (online or offline) and move them to another department. You may need to hire the right people who are willing to follow the trends and react to the changes in this tumultuous business environment.

You may have to let some people go and put different people in place.

While it’s something that no business owner wants to hear, having the right people is absolutely imperative if you are to have any chance at success today. The wrong people touching your current and future customers can be disastrous. In the past, you could hide them by giving them the easier customers. You could give them accounts that were lower-value or less important.

Today, everyone is important.

Social media can be powerful in both directions. If you use it right, you can excel in this Thank You Economy in ways that you’ve probably never imagined. If not used or used poorly, it can lead to disastrous results.

Understanding The “Thank You Economy”